Each week, Nava will introduce you to a different member of our team who'll share their thoughts on Nava, the industry, and the mission ahead. Following our recent launch and fundraising announcement, this week's Q&A features co-founder and lead investor, Kareem Zaki, who offers his unique perspective on healthcare:

My family is from Egypt, but I’ve lived in the US most of my life. Growing up, I always thought I would become a doctor. However, as I got close to starting medical school, I realized that healthcare was much more than doctors treating patients, and I wanted to better understand how the whole system worked.

And so, I diverted from medical school and ended up joining Blackstone, a private equity firm that had a large portfolio of healthcare assets. I didn’t know if investing was for me, but I was excited to learn more about the companies that drove the structure of our healthcare system. I learned a lot during my time there, but my most formative insight was that the large companies were far from figuring it all out, and that there were lots of opportunities for new companies to really innovate--especially in traditional industries like healthcare.

After Blackstone, I was lucky enough to partner with a small but ambitious team at Thrive that similarly believed that every industry (even the most traditional ones) would be transformed by technology. We invest across all industries in companies like Instagram, Spotify, Stripe, Slack, Robinhood, but we have also gone particularly deep in healthcare. We partner and work closely with companies transforming many major parts of the healthcare system--insurance, homecare, clinical trials, pharmacy, patient care, payments, cybersecurity, cancer, mental health.

We also spend a lot of our time building companies. I work closely with Oscar Health, an insurance company that was launched out of Thrive, and I’m also a co-founder of a patient engagement and payments platform, Cedar, which serves over 10 million patients.

What brought you, Brandon, and Donald together to co-found Nava?

Thrive was fortunate to back Donald and Brandon’s last company, and we knew we wanted to work together again. After they left VTS, we went back-and-forth on ideas, with most of them revolving around healthcare. During this process, Brandon tore his ACL. His experience dealing with that medical episode was a frustratingly opaque and confusing process that is, unfortunately, all too common for patients navigating the US healthcare system. Even though he was uninsured at the time, he knew that even under his old plan his coverage would have been under-optimized for his needs (despite Brandon being a founder and executive who was involved in picking the plan for the company). The experience helped crystalize and bring to life an opportunity we had been talking about in benefits brokerage, which eventually became Nava. The three of us started working closely together in partnership with a broader team at Thrive, and the more we dug into the opportunity, the more it became clear that this idea not only had the potential to help people in Brandon’s situation, but also the opportunity to transform some of the more structural issues in healthcare.

What systemic issues are healthcare companies up against today?

The overarching issue with healthcare, particularly in the US, is the disconnect between quality and cost. A lot has been written about how we pay nearly two times more (as a percent of GDP) than other developed countries, but don’t have better outcomes to show for it. Logic would suggest it’s because we consume more healthcare, but that’s not really the story; it's because, quite simply, the prices are just higher for the same services relative to other countries. We could spend the rest of this conversation outlining theories for why this is the case, but I think the primary issue is that we don’t have enough competition among healthcare options. Most consumers are only offered one or two health plan choices to pick from and have one (or maybe two if they’re lucky) large health systems near their home or office. The lack of competition often leads to a lack of accountability between health systems and health plans and their customers. Competition rewards those who deliver value (and more importantly punishes those that don’t) and without it, it is very easy to see how the quality and the cost of services can become disconnected, which when that happens, means we aren’t receiving great ‘value’ for the healthcare we are purchasing.

I initially believed that the lack of competition was because we didn’t have enough innovation in healthcare. However, I’ve been fortunate to meet with hundreds (and probably thousands) of really compelling new providers and companies innovating in healthcare, who have empirically demonstrated how they are both significantly improving quality and lowering cost. A number of these companies are growing but they are far from ubiquitous; broad adoption is an order of magnitude slower than what we typically see across other industries. It became clear to me that while having more innovative companies in healthcare was an important part of the story, it wasn’t the whole story, and if we wanted to drive more competition we also had to fix healthcare’s distribution layer.

Distribution in healthcare is complex, but if we simplify it based on who pays for health coverage, for the vast majority of Americans it is either 1) the Government (Medicare, Medicaid, ACA market to some extent) or 2) your Employer. I won’t focus on healthcare distribution through the government (although I don’t think many people will be surprised that it is often challenging and slow-moving). On the employer side, my view is that the market is fragmented and underserved. We have given employers the near impossible task of deciphering the rapidly evolving landscape of healthcare providers and trying to match these choices to their diverse set of employees who have different health and financial needs--all while balancing the competing incentives of limiting healthcare costs to the company but maximizing benefits to their employees. And, when the right decisions to make aren’t clear, inertia takes over and change--which means innovation--is slow to happen.

How do you think Nava can solve these issues?

Nava has the opportunity to solve the distribution problem, specifically for employers. Picking up on my previous point, the challenge with the employer-sponsored healthcare model is that we require employers to become healthcare experts. There are almost endless dimensions that employers have to assess in order to purchase the right healthcare for their company: what health plan? Network design? TPA or large ASO? Carve-out PBM? Self-insured or fully-insured? Chronic disease programs? Deductibles? HSA and FSA accounts? (and if you’re lost reading this or frantically looking up what the acronyms mean, you’re not alone). On top of all this, these decisions usually fall onto a business owner or HR leader or finance executive that has a lot of other responsibilities to manage. As such, it is no surprise that employers are overwhelmed managing their healthcare, and have struggled to get good value on their healthcare spend for decades.

The vast majority of companies are trying to solve this problem by partnering with a traditional healthcare broker or consultant. And, while these healthcare brokers and consultants are some of the most well-informed and intentioned people in the industry (I’m actually a licensed broker myself!), Brandon, Donald, and I don’t believe they have the right tools, technology, and support needed to  fully serve their clients in today’s incredibly complex healthcare system. We think there is the opportunity to empower the modern broker to do a lot more for employers and their employees, and that’s why we built a new kind of benefits brokerage with Nava—to aggregate the most innovative solutions and empower our brokers and consultants to effectively implement these products for employers and employees at scale.

Over the next year, I’m focused on making sure we bring aboard people who share our vision to become the trusted healthcare advisor for employers and their employees. Additionally, I want to set up an environment where individuals can clearly see the impact of their contributions and develop alongside their teammates and colleagues.

Over the next five years (and beyond), I’m most excited for Nava to accelerate the adoption of innovation in healthcare. I’m very optimistic for the future of healthcare because I’ve seen up-close a lot of amazing companies and products being built today. I’m convinced we already have great solutions for a lot of the problems we face; the main challenge left is finding ways to get it to more people, faster. I’m hopeful that our team can leverage our position as the trusted advisor to our clients and push much needed solutions into the mainstream. No time has this been more important than now, where many employers and families are at their breaking point with healthcare costs and a lack of options. 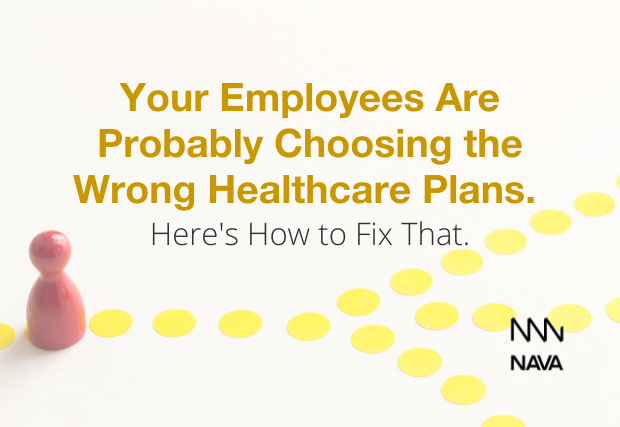 Your Employees Are Probably Choosing the Wrong Healthcare Plans. Here's How to Fix That. 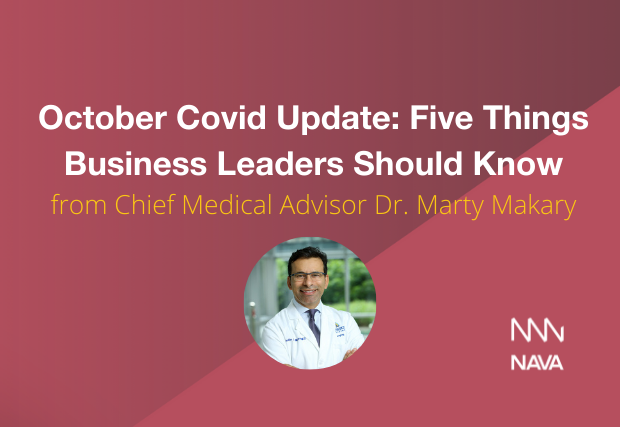