That’s a tough one. I consider myself a creative who just happens to be an entrepreneur. I think of entrepreneurship as actually a very creative medium, maybe the most complex form of art.

If I wasn’t an entrepreneur I would probably be trying to make it as a songwriter or novelist. But I know if I made it in either of those trades, I would probably spend a lot of my time thinking about solving big problems and “starting a business one day”. I'm pretty happy with the branch of the multiverse I ended up in.

Why healthcare? And why Nava?

In the winter of 2018 I was driving, mostly alone, around the Canadian Rockies. Ostensibly I was on the search for great skiing, but I was really on the search for myself. It was the first time in my adult life where I wasn’t in a relationship and had some cash in the bank. I could do whatever I wanted, and I basically did.

I spent time as a ski bum, a surf bum, and lone-creative-in-the-woods bum. While it was a lot of fun, life felt hollow without some larger purpose. When you’ve got something to give the world and you’re not giving it, it’s an existential crime that’s impossible to hide from.

In 2019 my co-founder, Brandon, recommended a book called Catastrophic Care. I'm a sucker for a big problem, and it doesn't get much bigger than healthcare. For much of my adult life I thought that the antidote to our healthcare crisis was some form of a single-payer system. But the further I went down the healthcare rabbit-hole, I realized things were much more complicated than that. We could move to a single-payer system tomorrow without changing the trajectory of rising healthcare costs. There's not a country in the world, single-payer or otherwise, that has figured out how to harness innovation in a way that drives healthcare costs down over time rather than up.

The solution isn't changing who is paying. The solution is creating competition. Capitalism has many flaws, but it does one thing incredibly well: create competition in the marketplace. And it turns out when you have real honest-to-god competition, prices go down and quality goes up. That dynamic will continue pretty much indefinitely as long as the market continues to function properly. That’s capitalism’s killer feature: competition.

Healthcare needs competition. Without competition, things are going to continue to get worse for Americans regardless of who is paying – the government, individuals, or employers.

What do you find so interesting about the benefits brokerage space specifically?

I don't think I'll surprise anyone by saying there’s no silver bullet for healthcare. In his book, The Innovator's Prescription, Clay Christensen says that a new "value network" must be created before disruption can occur in the healthcare industry. That's a Harvard Business School way of saying our healthcare industry is a 100-headed hydra that eats would-be disruptors for breakfast. Startups can't survive on their own, but no single startup can tackle the entire problem at once. As a result, most startups fail.

We talked about this in our founder’s blog post, but we were blown away by the number of entrepreneurs and investors who continue to make a run at healthcare despite the long odds. We learned that many of these startups have strong value propositions and great products, yet very few of them had a meaningful customer base. This is because healthcare startups rely on "benefits brokers" as their go-to-market channel. Benefits brokers determine which insurance plans are chosen and which innovative startups get deployed. Unfortunately, benefits brokers have been slow to bring healthcare innovation to companies, even when it would be the right thing for that employer and their employees.

We realized that this go-to-market problem was an opportunity in disguise. Rather than being an obstacle, Nava could be the benefits broker that enables innovation in healthcare. This would lead to a wave of successful healthcare startups, which would attract more entrepreneurs and investment. That talent and capital would lead to even more successful companies, creating a positive feedback loop of capital and talent working together to build a better system – essentially Clay Christensen's "value network".

We saw this exact thing play out with our last company, VTS. When we started, there was no such thing as the “Prop Tech” software category. Now there are entire funds dedicated to it, a second wave of companies started by early employees from companies like VTS, and an industry transformation that's accelerating each year.

What's one aspect of employer benefits that you are most excited to reinvent?

I’m going to cheat and give you two things. They're really about the healthcare system, but I see Nava positioned to play a key role in catalyzing positive change on both fronts.

The first is around safety and trust. We talk a lot about cost when it comes to our healthcare crisis, but there’s a crisis in healthcare quality that is just as urgent. Preventable medical errors might be the third leading cause of death in the United States, which is insane. That’s about a quarter of a million Americans killed each year due to medical team mistakes.

Why isn't this front-page news? Hospitals go to great lengths to keep this information from getting out, making people sign confidentiality agreements as part of their settlements. Imagine if the airline industry wasn’t required to report accidents or crashes, and turned a blind eye when pilots were caught flying under the influence of drugs and alcohol? No one would stand for that, but that’s the state of affairs today in healthcare.

Don’t even get me started on the fact that healthcare is the only industry where, if a medical worker makes a mistake and injures you during surgery, the hospital makes more money because you have to come back in for another procedure to get the issue fixed. This is like an airline that charges you for another ticket because they landed at the wrong airport, or sends you a bill for a new airplane because the pilots forgot to put down the landing gear.

I met a woman in 2018 who was almost killed by her surgery team: they left a staple in her stomach. Nagging stomach pain eventually turned into an emergency surgery – she nearly died on the way to the hospital. This was financially disastrous, to say nothing of the long-term damage to her body.

The second problem is our Kafkaesque system of provider reimbursement and billing. In 2013 I was diagnosed with cancer. I’ve written about this before - it was a really tough time in my life. I had insurance, but ended up with bills that somehow got into the $30,000 range. This never should have happened, but I was just an average American consumer and completely outmatched by the system.

Our current insurance setup sometimes feels like the world’s worst Costco membership. You pay thousands of dollars each year for the privilege to walk in the door. But there are no prices on anything and the cashier can't tell you the cost either. You're supposed to just walk out the door and wait for a bill. A bag of chips could be five dollars or five thousand dollars.

This absurd system has devastated the lives of everyday Americans. It's well known that medical debt is the leading cause of bankruptcy in the United States. Lesser known is that one third of working Americans currently have outstanding medical debt, and nearly half of that is in collections. Imagine how many more people raided their 401k, mortgaged their house, or raised money from friends and family on GoFundMe to protect their credit score. Those unable to scrape together the cash risk having their wages garnished for charges that are likely unenforceable under existing contract law. This is an institutionalized shakedown on the American public.

How can Nava possibly fix these things? There's a long answer and a short one. The short one is "scale". Nava will one day be responsible for directing the healthcare decisions of millions of Americans across the country. That means tens or hundreds of thousands of people in any given market will rely on Nava for healthcare guidance. With that scale, we will be a viable partner for healthcare providers and insurance carriers ready to make bold steps towards a better system.

Contrary to popular belief, healthcare systems and large insurance carriers are not "the bad guys". That said, they do operate in a system where bad incentives exist. That's a tough place for any large enterprise, whether they are public or private, for-profit or not-for-profit. There is a huge opportunity for forward-thinking incumbents to transform their industries and grow their marketshare – while doing incredible good for the American public. I'm excited to see who steps forward and how we can partner with them when the time is right.

Before working at Nava, what was the most unusual or interesting job you’ve ever had?

Running a recording studio. I was just out of college and had no idea what I was doing. It was horrible and magical.

I believe that the three most important metrics in business are top-line revenue, customer satisfaction, and employee happiness. If you get those right, you can fix just about anything else. If you get those wrong, it doesn’t matter how much else you get right - you’re screwed.

The next year is really about building the customer acquisition and customer success machine. And then of course making investments in our team and culture to keep us resilient and strong as we go through what will be rapid growth that will challenge each of us.

Beyond that, I'm really looking towards the horizon. And I think there's a real opportunity to transform the United States' healthcare system from a cautionary tale to the international example that other countries study and emulate. This would be evidenced in many ways, but I like to cite two high-level metrics.

The first is moving ourselves from the bottom of the list for healthcare access and quality to number one in the world. The second is that we’ve gone from 18% of our GDP on healthcare spending to 4.8%, which would just beat out Singapore who currently has the coveted #1 spot. These metrics aren't perfect, but they're directionally correct and simple to wrap your head around. Simplicity matters when you’re thinking in terms of decades.

We are the same country that put a man on the moon, created the internet, and resurrected Tupac as a hologram to perform at Coachella. We can figure out how to deliver the best healthcare in the world at the best price. This is going to be more of a test of grit than ingenuity – examples abound in the United States already on how we can get there.

How do we pull this off? George Harrison said it best:

A whole lot of spending money

It's gonna take plenty of money

To do it right, child

A whole lot of precious time

It's gonna take patience and time

To do it right, child” 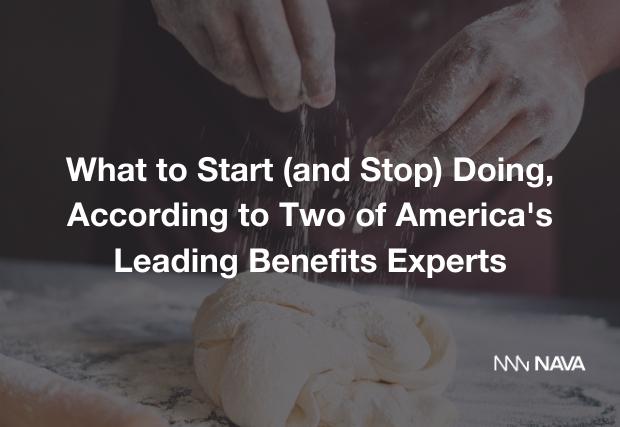 What to Start (and Stop) Doing, According to America's Leading Benefits Experts 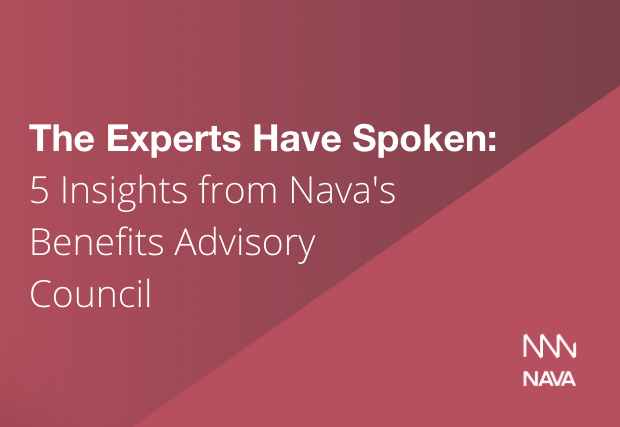 The Experts Have Spoken: 5 Insights from Nava's Benefits Advisory Council

We got your message and will reach out to you soon.
Oops! Something went wrong while submitting the form.